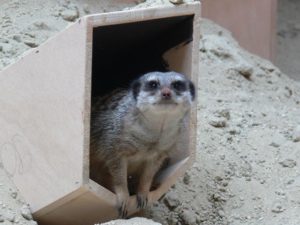 Position in group: Subordinate male. He is the youngest of the founding males.

History: Same as ZIM002 and ZIM003, ZIM004 was born and raised in the Durrell Wildlife Conservation Trust on Jersey island, United Kingdom. He and his older brothers arrived in Zurich on 11th February 2011.

Notes: ZIM004’s name at Durrell Wildlife Conservation Trust was Mark. He is best recognised, amongst the founding males, by his light brows. He is supposed to be the friendliest of the three males, and most relaxed towards humans.

In the Irchel group, he established himself as the most active and adventurous male, always exploring the surroundings.