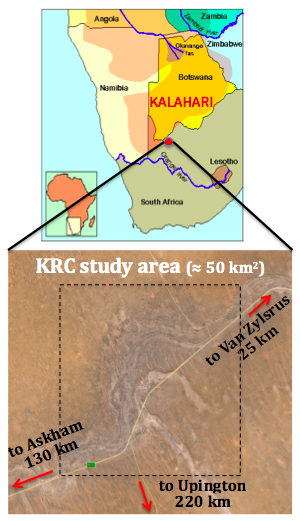 The Kalahari Research Centre is situated in the Kuruman River Reserve (KRR), in the Northern Cape, South Africa approximately 17 km south of the Botswana border and 30km west of the small town of Vanzylsrus.

The study site consists of sparsely vegetated dune country on either side of the (mostly dry) Kuruman River, and in addition to meerkats there is a diverse community of birds, mammals, reptiles and insects.

The KRR have been owned since 2001 by the Kalahari Research Trust, a not-for-profit organisation based in South Africa whose aim is to promote research, environmental education and conservation in the Kalahari region. The project current Trustees are:

The Kuruman River Reserve covers 32 km2/20 mi2 of semi-arid dune country on either side of the dry bed of the Kuruman River in the South African Kalahari. Vegetation consists of scattered camel thorn trees (Acacia erioloba) along the river bed, grading out into dry scrub dominated by annual and perennial grasses and Rhigozum scrub. There is around 250 mm/10 in of rain a year, mostly falling between October and March. In the summer (October-March), temperatures range from midday highs in the low 40s°C/100F (November-December) to night-time lows of around 20°C/68F. Temperatures are lower in winter (April-September) and often fall below 0°C/32F at night in the coldest month (July). People working in the reserve generally rest during the hottest time of day. Humidity is typically very low and night-time temperatures are usually comfortable.

The topography of the reserve consists of vegetated (“fossil”) dunes covered with grasses and separated by valleys up to 300 m across. The dunes flatten as they approach the bed of the Kuruman River, which is usually dry.