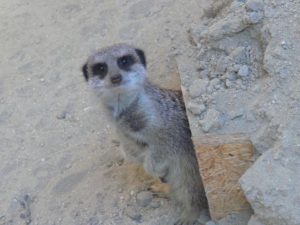 History: ZIM003 was born and raised in the Durrell Wildlife Conservation Trust on Jersey island, United Kingdom. He and his brothers ZIM002 and ZIM004, who have the same parents are from different litters, arrived in Zurich on 11th February 2011. ZIM003 acclimated well in Zurich, but soon moved to the most subordinate position among the adult males. With tension rising after two years, it was decided to remove him from the group. In June 2013 he was moved to Rapperswil Kinder Zoo‘s meerkat enclosure whose dominant male had died recently.

Notes: ZIM003’s house name at the Durrell Wildlife Conservation Trust was Dom, which is short for Dominique. He has a lighter face than ZIM004, but darker cheeks than ZIM002. He tends to bite when fed by hand. More shy than ZIM004, he went through a phase in which he often withdrew himself from the group.