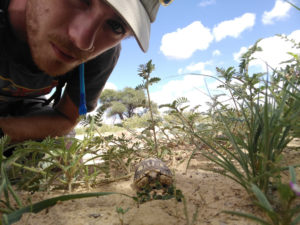 The natural world captivated me from a young age, this led me on a path to gain a BSc in Zoology from Cardiff University (2013-2016). I have undertaken several short term positions in field biology, most notably surveying fish species on Northern Tobago’s coral reefs. I intended to spend longer in the field, specifically working on animals living in social groups, this led me to the Kalahari Meerkat Project; where I joined as a field assistant in late 2016. I have now joined the management team, where I oversee a number of volunteers in addition to communicating back to Zurich and Cambridge University. I intend to remain in biology in the future and I  hope to continue to work on the knowledge I have gained thus far.